If you are going to San Francisco, be sure to wear flowers in your hair! 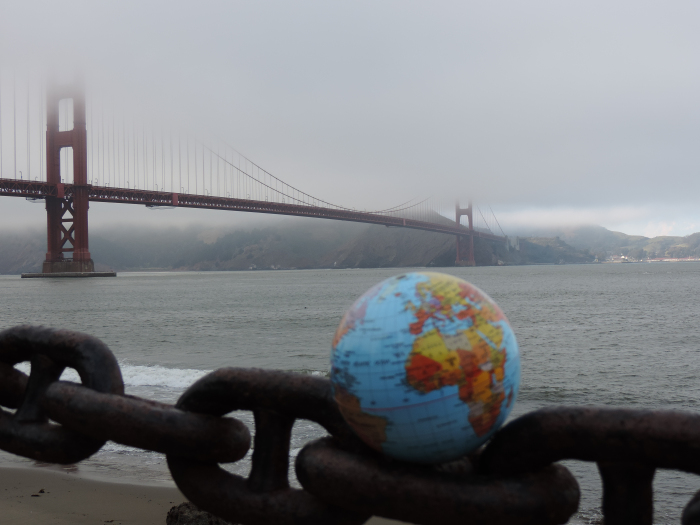 If you are going to San Francisco, be sure to wear flowers in your hair!

(Thanks to Joanna Amoroso for the translation)

It is 11 pm and San Francisco airport is calm. We quickly pick up our bags and we approach the exit trying to take the last train to the city centre, but it is too late. We decide to hop on a shuttle ride with a Chinese guy who has been living in San Francisco for 13 years and who brings us to our destination through the broad, deserted streets. We arrive at Kennix’s home, our accommodation during our stay in SF. We found this place on the AIR B&B website, which saved us a large amount of money. The house is cosy and well organized. We settle our stuff and just as quickly we fall sleep. The next morning we meet a young Swiss couple who are sharing the apartment with us. Matthew and Sandrine are planning to travel for 1 year between the US, Mexico and Guatemala, they are struggling with the camper they have just purchased. We say goodbye to them and immediately go to buy something to eat: we are starving, as we did not have any food during the long trip from Europe. We go into the supermarket, and we feel a bit confused. We spend some time to figure out what to put in our shopping basket. The shelves are bursting with products, products of uncountable varieties, packed in giant and colourful boxes: tons and tons of food and drinks that can confuse even the most methodical consumer. After an indefinite time spent in the supermarket trying to orientate ourselves, we go home and, as we prepare our breakfast, we study the map of the city.

San Francisco is a big city, lying on 43 hills, populated by 4,594,060 people in the urban area only, 8.6 million throughout the country. Funded by a Franciscans’ mission in the late 1700s, it grows incredibly during the gold rush era began in 1840 and, in a few years, a small village of 800 people, becomes San Francisco, a city of 100,000 inhabitants. Walking through the city, we find the same faces of the European conquerors who we met in Spain and Portugal. A Columbus’ statue dominates the Pioneer Park, on top of Telegraph Hill and near the Coit Tower (the latter, it is a gift to the city from Lillie Hitchcock Coit who says, “to be in an expended appropriate manner for the purpose of adding to the beauty of the city which I have always loved “- but we are not so sure that the tower really added beauty to the city). In the area of the Civic Center, the Pioneers’ Monument summarizes the most important stages of the city history through the faces of the most famous pioneers like John Sutter, John Fremont and Sir Francis Drake. The statue is strongly criticized due to the figure of a native american subdued at the foot of a Franciscan priest and a Mexican vaquero. 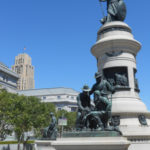 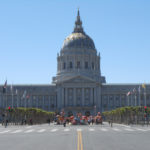 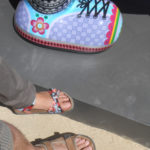 Walking from the Pioneers’ Monument, we arrive at the Civic Centre Square right in front of the City Hall. The square has plenty of the colourful sculptures of Hung Yi, a Taiwan artist, displayed in the temporary exhibition named “Fancy Animal Carnival“, among which there is also “our” animal: the lucky dragon wearing tennis shoes ready to travel around the world! The colours of the sculptures blend in with the music and extravagant clothes of three girls who are preparing their instruments to play just in front of the City Hall. Attracted by the music, we get along with other passers-by when two brides dressed in white strongly criticized: the group was there for them, it was a surprise to wish much happiness for their wedding. 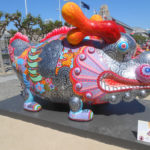 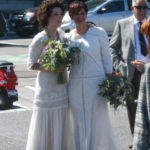 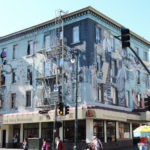 Happy for being part of this little surprise, we continue our walk up to Market Street, crossing China Town and North Beach. We get lost among red lanterns, street musicians, we forgot our city map four times, and we ended up among tricolour flags of the slew of Italian restaurants in the area. Tired and attracted by an apparently anonymous small bar, we decide to have a break at Caffè Trieste, near Saint Francis square, at the crossroads of some of San Francisco’s most important roads: Upper Grant, Broadway, Columbus and Vallejo, where in the 50s, the Beat Generation authors and the proponents of the bohemian life as Alan Watts, Jack Kerouac, Allen Ginsberg and Lawrence Ferlinghetti, used to meet. Ferlinghetti is still a regular in this area. It seems that Francis Ford Coppola wrote much of the script of “The Godfather” sitting at a table at the Caffè Trieste, a small bar similar to the worst dives Italian of ’50s, with an old world’s charm, decadent but full of character and colour. The old fashioned, dusty and fragile furniture, an old jukebox, the floor with broken tiles, the ugly mural of some unknown local artist, the aroma of espresso and the clink of the cappuccino’s cups make us feel a little bit at home but, at the same time, in another era, the era of timeless.

A time when bars were not only places of encounter, but also places of the soul, ways of being and forges cultural, bars that exceed the barriers of time, that unchanged resist the fashions of the lounge bar and that transmitted from generation to generation and anecdotes, jokes, memories, stories and culture, in a word: identity. Italian Identity in particular. North beach is known as Little Italy, as it is populated by Italian immigrants, which arrived in the second half of the 800 from Sicily and Tuscany, contributing to the development of fisheries and the fish trade in the city. 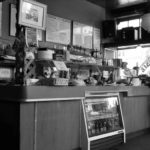 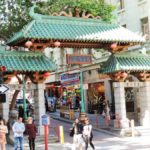 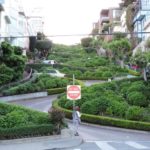 From North Beach we go to Lombard Street to see crookedest street, 27% slope mitigated by 8 turns to go at a speed not more than 5 mph. Going back to Little Italy, we could not resist the lure of a good pizza at Maurizio, who invites us into his restaurant showing us his picture with the Italian Prime Minister, Matteo Renzi. The restaurant is small and full of flags, paintings, photos, references to the motherland on the walls where notes of Italian melodic songs bounce. A FIAT 600 adapted to a table restaurant is parked in front of the restaurant, we are a bit perplexed, but judging the happy faces of the Japanese guys intent to toast in the car, this idea is brilliant in the US.

Besides walking, the subway becomes our means of transportation in San Francisco, faster and cheaper than buses and rental cars. Montgomery is the subway stop stuck in our memories, in the heart of San Francisco Financial District on Market Street. Standing on the escalator that leads to the surface, our noses stretch upward to try to look on the top floor of the skyscrapers overlooking the exit. The feeling is that of dizziness. It is difficult to not look straight down to the ground, where on the sidewalk there were two tattooed guys with dirty and torn clothes, “sleeping” on their empty backpacks. They were in the heart of the city, between 12 heels and shiny shoes of workers in the financial district. Immediately many questions marks pop up in our thoughts.

We continue walking. Going forward, the situation does not change homeless people and half-naked youth begging at traffic lights, perhaps under the influence of some drug. Perplexed we wonder why so many people marginalized from their family, the community, the city and the society rhythmically living in the shadow of the Transamerica Piramid Center. Trying to give an answer to all our questions, we reach Height Ashbury, remaining a bit disappointed by what remains of the “Summer of Love” and the “Flower power”: a colourful street, paved with ethnic shops, oriental coffee and smoking-pushers with dogs on a leash. Let us turn then to Castro, via Twin Peaks (which has nothing to do with Lynch), where rainbow flags flutter and rainbow crosswalks guide us to Harvey Milk’s headquarters, the first openly gay politician elected to the San Francisco Board of Supervisors assassinated on Nov. 27, 1978 along with Mayor Moscone. The neighbourhood is buzzing, bars and restaurants are full of people, a boy in the street sells jokes at 25 cents. We go to QBar for a break to drink something: at the bar a couple of boys have their drinks and on TV there’s Flash Gordon, a 1980 movie with Ornella Muti in spacesuit… terrible. While the DJ starts to play music, we leave to go back home. 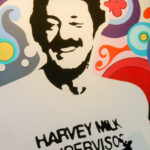 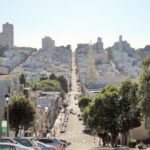 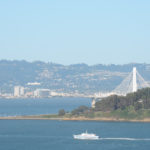 We decide to spend our last day in San Francisco exploring the Fisherman’s Wharf and the Embarcadero. We see the municipality bike rental columns self-service where you can rent a bike at 9 dollars a day. It is done! Payment only by credit card. No problem, we have 3 credit cards. We insert the first card, the second and the third for more than once, by trying different columns. Nothing. We understand that foreign credit cards are not accepted. Payment is only possible using US credit card circuit. Disappointed, we do not leave the idea of making a bike ride to the Golden Gate Bridge and we rented 2 bikes at Parkwide Bike and Ride: 3 hours, 2 bikes for a total of $ 53. We ride just not thinking about it; the prices are standard at all the facilities rental. So off, we go. We enjoy the ride, the day is a bit ‘grey’, but the roads are equally populated by families for picnics, sports race, gentlemen who give free hugs, happy children who bathe in the cold waters of the ocean.

The arrival at the Golden Gate Bridge is breath-taking, you feel suspended, so just like the bridge, we look at the city and retrace mentally all the stages: Native Americans, pioneers, the Spanish presence, the skyscrapers, the homeless, openness to homosexuality, the Italian immigrants and the flower power. San Francisco gave us new and different images compared to those we were used to in the past few years of our life spent between Italy and Africa. Besides Starbucks serving cappucino in plastic cups and Burger King selling plastic food, San Francisco actually makes you feel strong emotions, not just those related to the history, but also those of the new vibrant experiences blooming in this city. In neighbourhoods like Berkeley, you can walk where the Black Panthers used to meet, you pass into the Gilman Street Project, an alternative project to create a free aggregation environment where everyone can express freely their ideas. Moreover, the Free Speech Movement of the students of the University of Berkeley led by Mario Saviobetween 1964 and 1967 fought for the freedom of expression of the students and the academic freedom. All these movements spread seeds all around so that new realities bloom, grow, like the one we met in Albany, the Gill Tract Community Farm, and the team of Food First, committed to affirm food sovereignty, with which we had lunch in the garden urban of their office. Lunch Km 0 with salad of flowers. San Francisco put flowers in our hair, but also in our stomach! 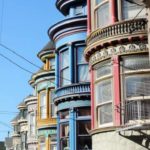 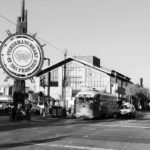 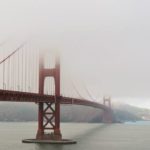