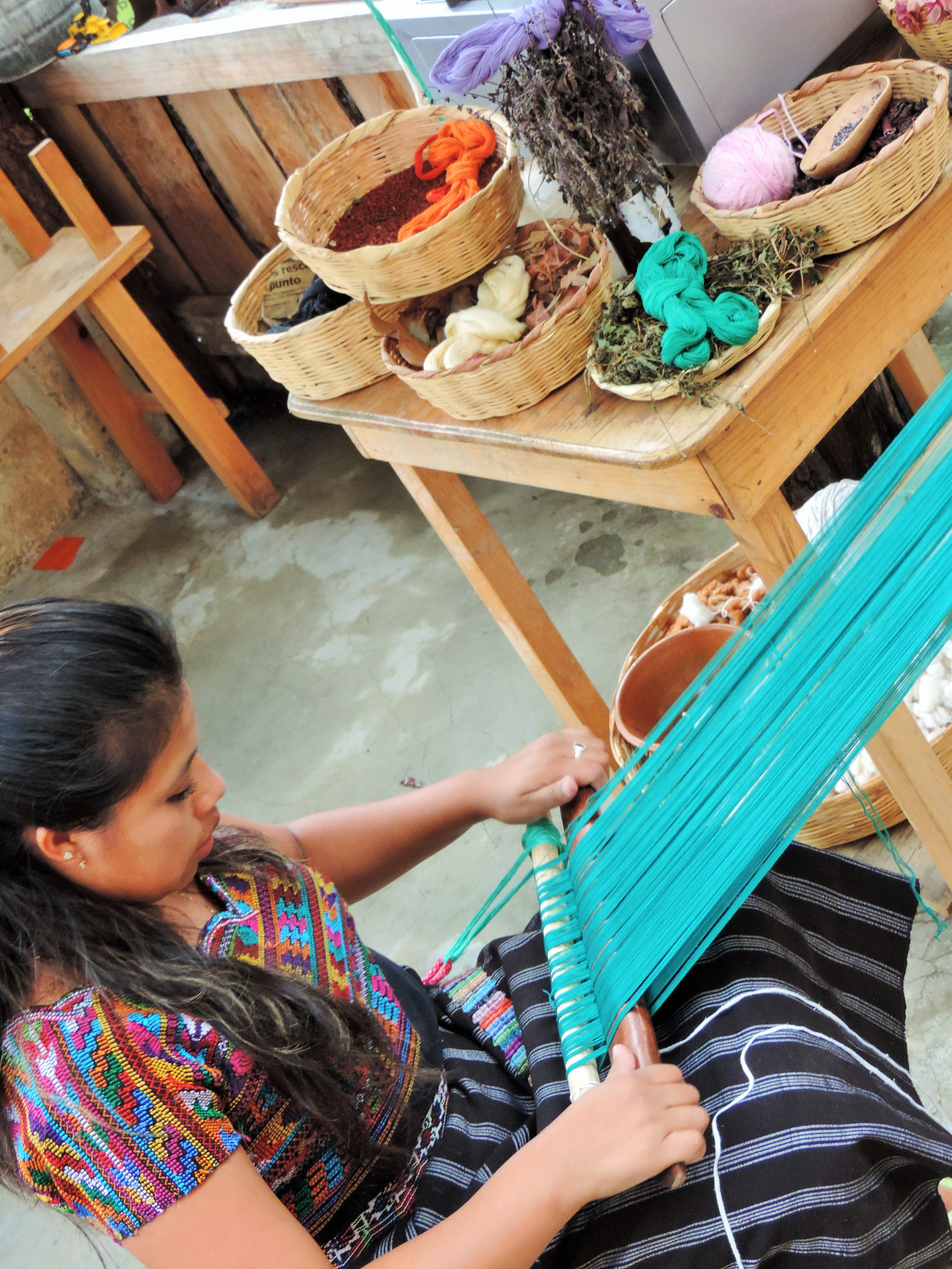 After three changes of minibus and a long run on the winding and verdant roads that connects Mexico and Guatemala, we arrive at Panajachel, on lake Atitilan, where we climb on a small motor boat to reach the village of San Pedro. It is getting dark and it is raining copiously. The small boat has perhaps too many passengers, so we get closer together to make room for everyone since it is the last ride of the day. In the dark of the night, completely wet, we arrive in San Pedro, we load our very wet backpacks on the shoulders and head straight to the hostel Nahual Maya, we really need to rest after such a long journey.

When we wake up in the morning, we can finally appreciate the beauty of the lake, with the 3 surrounding volcanoes: Atitlan, Toliman and San Pedro, as well as the beautiful villages that complete the wonderful landscape. Francisco, the guide from the cooperative Asoantur, ), talks about the sacredness of the lake and the surrounding mountains for the local people during our walk to the top of the “Indian’s nose”, so named because the mountain profile reminds the profile of a person’s looking up to the sky.

Francisco tells us that long, long time ago, a young girl was sent by her mother to bring tortillas to her dad who was working in the forest near the lake. On the way, however, the girl is swallowed up by the mountains where he discovers a beautiful world, full of joy, love and happiness among people. Her parents are very concerned, they send the police to look for her, but when they find her, the little girl says that she want to stay in the belly of the mountain, because she is happy and has found its place among the mountain people. Since then, local people believes that there are ancient people living inside the mountains and for this we must wall gently when walking up the mountains, in order not to disturb the mountain and its inhabitants. We pass through green corn and coffee fields and high avocado plants, we salute the shy peasants working to their fields.

Thanks to Francisco, we discover that lake Atitlan is constantly raising and lowering, reaching the maximum and minimum level every 50 years, thus, many houses carelessly built along the shore of the lake are submerged in the water and disappear. Hotels and restaurants remain buried in the water for 50 years and then re-emerge 50 years later. People who buys are generally people who come from abroad to invest in Guatemala and who are not aware about this strange  phenomenon. The raising and lowering of the lake waters is due to a large fracture in the lake bed widened by the earthquake that stroke Guatemala on February 4, 1976, magnitude 7.5 (which killed about 26,000 people).

The view from the 2,200 m el Rostro de Maya (Indian’s nose) is magnificent, in between the thick clouds we see the blue surface of the lake (1,560 m altitude) reflecting the image the green volcanoes surrounding it. Along the way, in the dense forest to reach the summit we meet several boys and men who daily climb up and down the mountain to go working in one of the growing towns scattered around the lake. It starts raining again so we decide to jump on a truck covered with a plastic sheet and sit among local women, boys, sacks of potatoes and farming tools. We descend the steep and winding roads passing through San Juan and Santa Clara and finally arriving in San Pedro. Now it has stopped raining, obvioulsy. We salute Francisco and decide to take a little walk along the lake. 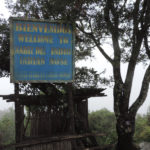 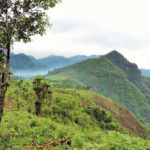 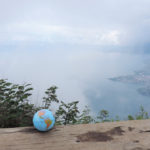 A green sign with the inscription: “Lake Atitlan – Women Weavers Cooperative (Lake Atitlan – Women Weavers Cooperative)” draws our attention, curious we enter the small tienda (store in Spanish) just to have a look. Anita, welcomes us immediately with a charming smile and, proud, she begins to tell us her personal story and the story of the cooperative. Anita was born 27 years ago in San Pedro, last of five children. Unfortunately, her mother, suffered a stroke while giving birth, she fell very ill and for years the father tried to find a treatment, investing all his resources and seeking medical consults in Ciudad Guatemala. Since her mother could not take care of baby Anita, she was fed and cared for by some temporary nannies and then sent full-time in Solola, the provincial capital, adopted on a temporary basis by a local woman.

After three years, the mother recovered partially but remained in a wheelchair for the rest of her life. Since she was a child Anita demonstrated her great intelligence and sense of responsibility in helping her family to earn a few extra quetzals (the Guatemalan currency): “I used to bet with my mother that if she gave me 2 quetzales, I would bring back home at least 10 by the end of that same day. Indeed, with one quetzal I used to buy a bunch of bananas sell it to tourists and earn 10 quezales to bring back to my mom”.

So Anita comes into contact with many people, with her positive and enthusiastic stubbornness she decided to study in the capital, as secretary earning her deserved degree. In the meantime, Anita knows the man who for a few years will be her husband. During her short marriage she gave birth to a child, who is playing in the tienda while we are listening to Anita’s story. She tells us how her husband, an educated urban man, did not respect her and belittled her because she was a women and less educated than he was.

Anita could not stand the constant humiliation, so he decided to divorce. Over the last years she has realized her dream: to become a tourist guide: she improved her Spanish, she learned English but especially the trust of those who immediately gave the chance to work. Although her dream was realized, he decided to fight a small battle for the women of San Pedro. She explains us, how the idea of ​​the cooperative came up with her mother, her sister and some women in the village. They created a cooperative of weavers using only natural materials and traditional techniques, producing quality handcrafts and at the same time promoting their traditions and values respecting the Pachamama, mother earth.

Anita shows us the entire production process: how to get the thread from a cotton ball, how to strengthen it, how the cotton is coloured using natural extracts: mint for green, cochineal for the red, how you fix the colour, how to prepare the weaving belt and, finally, the actual weaving. A long and patient process: for a scarf it takes about a week. She decided to tell her story because she is the only one speaking Spanish fluently out of the 12 members. The cooperative has sought support from the local authorities but did not receive anything. Anita and the other did not, however, lose hope: Anita, in fact, asked the permission to sell the products of the cooperative at the office of the agency for which she works as a guide. So, little by little, the found support and opened the small shop on the lake.

From the 5 women who founded the cooperative, they are now 12 and more women want to join. “It is hard” says Anita, “people now are accustomed to industrial, low quality fabrics and products that they buy at very low prices and they do not understand the amount of work we have to do, by hand, for several hours every day, using only natural products, producing long-lasting and high quality products. Furthermore, we follow the tradition and convey it to the next generation in order not to lose it”. We are amazed by simply looking like a simple cotton ball can generate such a strong thread by using only 5 fingers and a little saliva. We were impressed by the determination of Anita and the women of the cooperative who did not despair despite the many “no” and decided to start their project anyway.

The project indeed, is slowly, bearing the first fruits and satisfactions. Anita continues: “We need to make people understand the importance of what we are doing, first and foremost to our people who is forgetting our roots and traditions, as well as the importance of respecting the natural environment and the use of its precious resources”. The road seems to be long, but Anita does not seem to care. Her energy is contagious, and we cannot stop to thanking her for all the stories and thoughts she shared with us in a few hours. A million ideas and a great desire to achieve them. 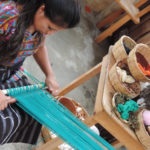 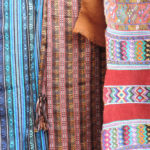 We thought about Anita’s story for days, so much that a few days later when we meet Andrea, we both immediately linked the two girls’ stories. Andrea is a 12 year old girl who approached us while chilling out at a bar in Antigua. Loaded with scarves and bracelets she approached us with her bright eyes and infectious smile. He stops to talk with us. Native of Santa Catarina, a village on lake Atitlan, Andrea lives with her aunt to help her selling the scarves and bracelets that she makes by herself. She says that in one day she can earn up to 150 quetzales (about 18 Euros) and that when she goes home empty-handed her aunt often reacts violently. Andrea is very cute and speaks Spanish very well, but, above all, she makes us laugh! In the end, we cannot resist and we end up buying a blue scarf for Stefano while Andrea chose a bracelet for Daniela, giving us ne extra for free. We chat a little more until she greets us to continue her roaming. Andrea, as Anita, entered into our hearts.

We also found similarities between Anita’s story and Feliciana’s words. Feliciana is a member of the national board of directors of CONAVIGUA and we met her during our last days in Guatemala, in the infamous Guatemala City. CONAVIGUA was founded in 1988 and is the National Coordination of Widows of Guatemala created at the initiative of war widows following the civil war which saw the genocide of 200,000 people, mostly indigenous. COVAVIGUA works for the recovery of historical memory and supporting the affected people inseeking for justice and dignity. The organization works mostly in the cities of Quiche, Chimaltenango and Verapaces. CONAVIGUA works for the respect of indigenous communities, the environment, the preservation of natural resources, the advancement of women and the respect for human rights. Since 1988, the long march towards the affirmation of the rights of rural and indigenous communities is still ongoing. The consequences of the civil war are still alive and new threats loom over the land and the indigenous communities. Feliciana has a sister desaparecida (disappeared without explanation). She struggles every day to achieve justice for herself and all the other mothers, grandmothers, sisters affected by the conflict.

A trip through the heart of Guatemala saw through the eyes of 3 women who allowed us to discover a bit ‘more about this wonderful country that is rarely on the headlines of international media. A country and a lot of new discoveries: the struggles to defend indigenous traditions, the preservation of the Maya culture, the preservation of the natural environment on which we depend for our survival, the fight for justice and the for the respect of human rights in a present without hope, but rich of repression, violence and crime. 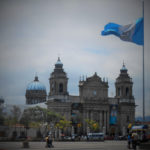 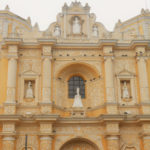 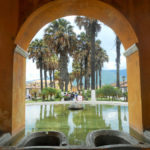