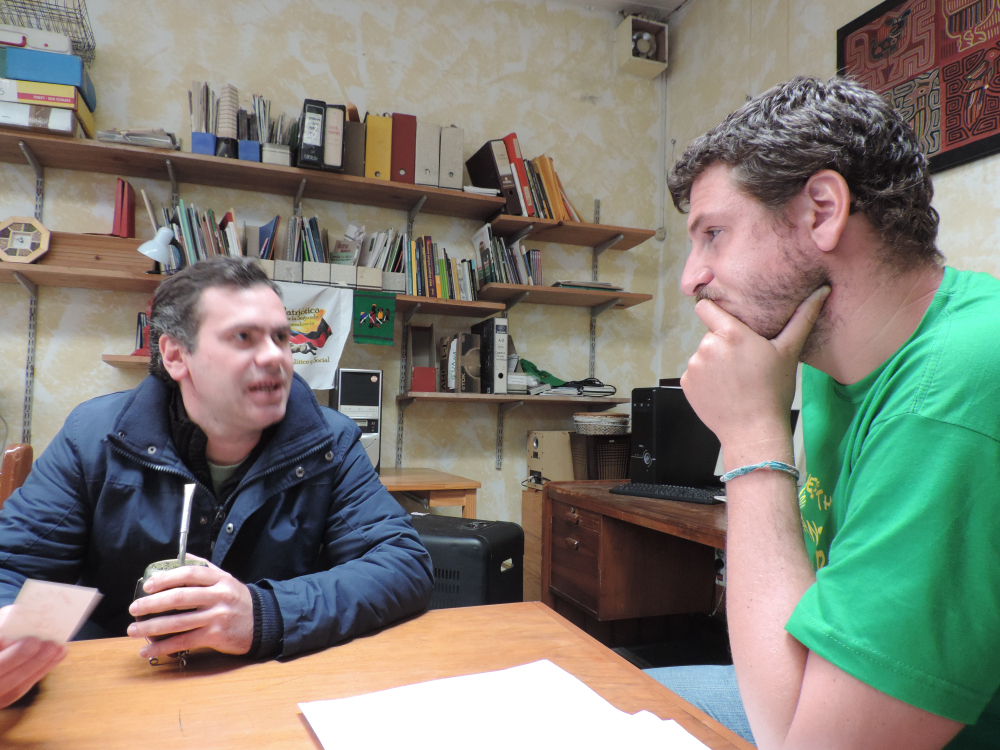 “Mujica is the best president we could have,” says Pablo, “everyone knows his beautiful speech at Rio+20 Summitin 2012 but, then when it comes to making decisions at home, things are different.” In Uruguay, between 2000 and 2011, with supposedly left wing parties in charge, 40% of the small farmers and 20% of the medium-small farmers have disappeared as the land has been rapidly acquired  by foreign investors. Public policies to support family farming are weak and inconsistent compared to the priorities of a government that wants to promote agribusiness and thus supports big investments of capitals coming from abroad.

Pablo Galeano, agronomist, organic farmer and professor of the Faculty of Chemistry at the University of Montevideo, also works with REDES (Red de Ecologia Social, Social Ecology Network)  and deals with issues related to biotechnology, GMOs and agricultural and livestock national policies.

REDES is an Uruguayan ecologist network established 1988 and inspired by Leonardo Boff’s social ecology theories, trying to develop a radical social change and promoting an improved  balance between natural resources and human beings’ needs. REDES is also a member of the international federation Friends of Earth (FoE *) spread in 75 countries and with over 2 million members and supporters.

“Pepe” Mujica, has been spreading the idea that all environmental concerns are  no more than Western propaganda whose final aim is to impede  Latin America’s economy development and he is a strong supporter of GMOs as a practical solution to produce more food and solve the problem of hunger. His vision seems to envisage a first period  of dependence on multinational corporations to develop and sell genetically modified seeds  followed by a second stage of disangagment. According to Pablo this is: “An illusion, a dangerous illusion. Agribusiness companies want to do what pharmaceutical companies are doing with drugs, that is,  making money with patents.” These companies, such as BASF, Bayer, DuPont, Dow Chemical, Monsanto and Syngenta, known as “the 6 agribusiness giants”, are portraying themselves as paladins of the fight against world hunger. In reality, like every corporation, their aim is to generate profit and they do so  by selling herbicides, carcinogenic pesticides and genetically modified seeds, products whose effects on living beings and environment are still unknown and are already destroying agricultural practices that have been in place for hundreds of years.

In reality, companies are not the only ones developing genetically modified seeds. There are also foundations like the Bill and Melinda Gates Foundation, that are funding GMOs’ production,  like  the “golden rice” project, whose aim is to integrate beta carotene in rice. The idea, translated in simple words,sounds roughly like this: since the poor can only afford a handful of rice, rather than solving the problem of poverty itself, we’ll add beta-caroten to the rice so, at least, they won’t become blind.. A useless invention, as all it takes to reach a sufficient intake of  provitamin-A  isa varied diet including food such as milk, eggs, liver, carrots, tomatoes, spinach or peppers.

The results of the cultivation of genetically modified plants, however, are very different from those declared by agribusiness companies. Pablo says: “In 20 years of transgenic agriculture in Latin America all we have achieved is loss of biodiversity and a massive use of chemical herbicides and BT toxins.” (insert link).https://it.wikipedia.org/wiki/Bacillus_thuringiensis

In times of climate change it is essential to have access to a diversified range of seeds that will allow humanity to grow food even if the environmental conditions were to change quickly. The genetic diversity of seeds has been carried on for millennia with the exchange of seeds among farmers. This traditional practice is now endangered by the use of GMOs and government policies: the agribusiness giants would like to replace a millennial cultural practice with genetic engineering and speculate on it. For example, in the ‘90s in Uruguay there used to be seven maize varieties. Today 90% of the corn production comes from genetically modified seeds and is rapidly contaminating the traditional ones.

Uruguay has been featured in many articles in international media, and recently also at the EXPO 2015 in Milan, as an agro-smart country. Smart agriculture (also promoted by the FAO) aims to use the latest scientific discoveries in agriculture, such as satellite monitoring of cultivated areas, drip irrigation, livestock electronic tracking: some of these technologies are definitely positive butothers can be highly harmful in the long run to both human beings and environment. Pablo told us: “Looking at the data, we see that agriculture (in Uruguay) is not smart at all, as we suffer of  serious environmental issues and every day less and less farmers live in the countryside. It is true that agribusiness moves a lot of money but it also causes  depopulation of rural areas, migration to cities and selling or leasing of agricultural land. Uruguay imports all the chemicals for cultivation as well as all the tools, the machineries and the seeds so, we believe, there is very little smartness in the Uruguayan agriculture. “

The current system attracts international financial capital coming from European and American investment funds that rent farmland and outsource everything else: preparation, planting, cultivation and harvesting, promising profitable financial returns to the investors. Usually, this type of agricultural investment opts for genetically modified soybean (Round-up Ready or Round-up Ready 2 by Monsanto) which until now have ensured substantial profit. Pablo continued: “The cultivation of soy is based on high mechanization, namely agriculture without farmers, direct seeding, glyphosate (known carcinogen) to destroy the plants and transgenic soy resistant to glyphosate. If glyphosate not only is highly toxic but also clears any ground cover, as soybeans consume more nitrogen than it fixes in the soil. The two actions combined lead to a sharp deterioration of the soil.”

Moreover, Pablo insists: “While in the last 10 years the cultivable agricultural land in Uruguay has quadrupled, the import of agrochemicals has also seen a six-fold increase. Technology is not helping at all to create a truly sustainable agriculture, in fact Uruguay is facing a serious problem of eutrophication primarily due to the use of phosphorus-based chemical fertilizers. Capitalism has its cycles. There has been a phase when some commodities produced in Latin America where sold for high prices but, at the end of this period, when the capital will move somewhere else, Latin American countries will be left with depleted soil, landless farmers, polluted water, seeds contaminated by GMOs and destroyed roads. All damages that the government will have to solve with citizen’s money, as international companies pay very few taxes in Uruguay. “

Is this an agricultural smart Uruguay? We do not think so.

In this unreassuringly context REDES is pursuing a difficult but important goal: creating and promote alternative forms of development based on an agro-ecological and sustainable model. REDES work is accompanied by a significant communication effort: Radio Mundo Real, a web radio that also collaborates with LVC – La Via Campesina (the largest farmers movement in the world). Other initiatives include the protection of seeds biodiversity through the coordination of the National Network of Indigenous and Criollo seeds, the organization of the annual “seeds and family farming fair” to promote the use of local seeds, provide visibility to producers and promote family farming. REDES aims to generate debate on these issues in a serious and documented way with official figures showing the facts and discussing the pros and cons of GMOs. REDES also wants to create conditions which would allow families currently living in the countryside to continue living  there (and prosper). Small farmers are considered inefficient and according to most politicians should leave their fields, move to the city and let corporations produce food. The most recent initiative is the creation of a national plan for agro-ecological agriculture that Uruguay does not have yet and that REDES is developing in partnership with farmers, academics, agronomists and in constant dialogue with the government. Pablo says that, fortunately, organic agriculture in Uruguay is growing because it is proposed as a real alternative to food produced by transnational corporations, while small-scale conventional agriculture based on the use of herbicides and chemical fertilizers is disappearing.

The road is uphill for Uruguay and his land plundered and defaced by international capital and the pursuit of profit, but some solutions do exist and REDES is a small but bright hope for the future.