The amazing and iridescent kaleidoscope world 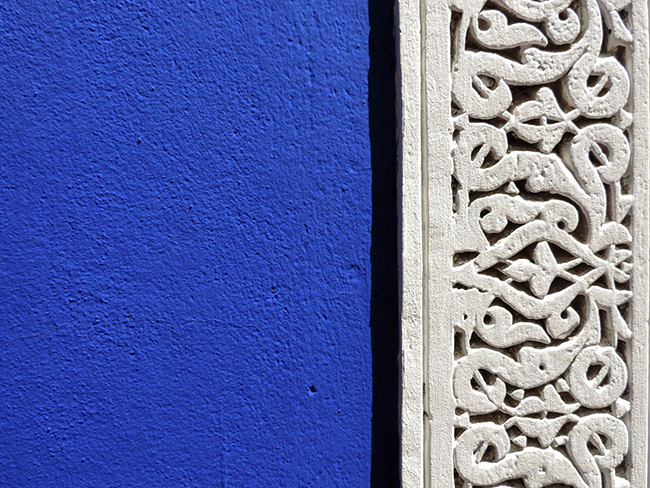 The amazing and iridescent kaleidoscope world

Let the colours, lines and shapes describe the amazing and iridescent kaleidoscope world.

“A traveller without observation is a bird without wings” wrote Moslih Eddin Saadi, almost a thousand years ago. I deeply agree. Details speak directly to the heart and arouse deep emotions that are difficult to translate into words. The contrast between an elaborate white cornice and a rough blue wall whose tone is named after the French artist Jacques Majorelle, expat in Morocco. The soft lines and delicate shadows of the foot of a Christ’s statue, located a few meters from what was the first Cuban home of Che Guevara, at the dawn of the Cuban Revolution in January 1959. Morocco is an uneven and peeling wall of a terraced roof of the Marrakech medina, where you could lose yourself watching the endless, pure and blue sky of March, while enjoying a sweet and aromatic mint tea. The sky never ceases to surprise even when, reflected in a placid Portuguese lagoon, confuses and disorients with its spectacular game of mirrors. To travel is to discover the forms of the world, natural shapes like the geometric patterns that run through the Uyuni Salt Flat, or the result of human genius such as the soft and majestic Inca walls that have withstood the destructive violence of the colonizers and still prove the intelligence of such a proud and indomitable people.

The details of the fabrics tell us the story of cultures distant from each other but similar in the use of lines and variety of colours: the warm Moroccan fabrics exposed in the medina of Fez, the cheerful fantasies of the Guatemalan cotton fabrics and the bright stripes decorated with golden animals, hung in Thailand to celebrate the Chinese New Year.  Straight lines express movement, whether they are the red vertical lines of the Golden Gate’s pillars, supporting a grey and overcast sky, or the yellow lines of the shiny Peruvian train that brings travellers to the legendary Inca citadel of Machu Picchu. The details of a colourful mosaic, fruit of the patience and Thai ability, recall the harmony of a delicate mosaic created by flowers resting on the water in the shape of a mandala, representing the universe. To choose the evanescence of cut flowers that will wilt in a few hours to represent the infinite universe is one of the many fascinating Indian contradictions. Cities are often real urban jungles but, when observed with open minded and curious eyes, can reveal enchanting geometric patterns. It is the case of the Hawa Mahal, the breeze palace, built on the main street of Jaipur to allow women of the Royal House to watch processions, military parades or simply everyday life, without being noticed.

A beautiful building, framing the sky as the moon is coming up. Even cities like Amman and San Francisco can surprise with sudden harmonic details and unexpected geometric patterns: colourful houses in the Californian city, off-white or pink for those of the Jordanian capital, an oasis of peace and security in the troubled and belligerent Middle East. Omar Khayyam, a Persian scientist of the twelfth century wrote “Life is a journey, travel is to live twice” but during this trip around the world I have often had to deal with death: in front of the graves of the Nabataean kings, dug more than 2,000 years ago in the pink rock city of Petra or the monumental tombs where, 1,000 years ago, the Khmer Kings were buried and their memory entrusted to elaborate stone carvings, seemingly indifferent to the passage of time. Finally, the detail of a Cambodian tree bears witness to the death of thousands of children beaten against its bark by the lucid madness of the Khmer Rouge communist ideology and its leader Pol Pot between 1975 and 1978.