The role of women in the democratization process of their countries: the case of Kurdish women. 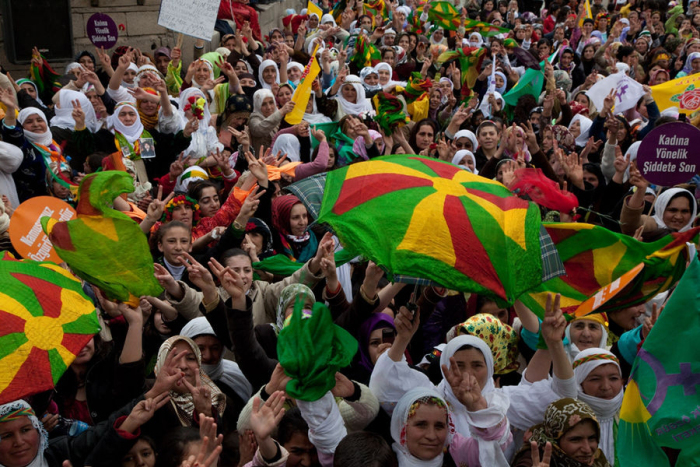 The role of women in the democratization process of their countries: the case of Kurdish women.

One of the most interesting and unexpected meeting during the World Social Forum in Tunis, it is certainly the one with the representative of the Kurdish Women’s Relations Office, who spoke about the long struggle of Kurdish women for the recognition of their rights, within the overall democratic process of the complex  Kurdistan.

Kurdistan is not a nation but an independent state politically divided between Turkey, Iran, Iraq and Syria. The current territory division was defined at the end of World War I and it makes Kurdish people, up to today, one of the most numerous ethnic groups without a state. With 50 million inhabitants and more than a million displaced people in the Caucasian countries, Kurds are the largest ethnic group in the Middle East, exceeding in number Arabs and Turks. Since 2011, with the outbreak of civil war in Syria and after Saddam Hussein’s fall, the respective federal zones gained progressively a greater political autonomy.

In a complex situation as the Kurdistan’s one, where political and commercial interests are closely connected, occupying state and dozens of oil companies are reluctant to recognize the autonomy of these territories and where the Islamic State is now trying to advance, what is the status of women?

The celebration of March 8 of this year was devoted to the efforts of Women’s Protection Unit, female brigate of People Defence Forces (YPJ) who fought valiantly in Rojava and Kobanî to stop the advance of Syrian civil war and of the Islamic State.  Now, Women’s Protection Unit continues to fight against for the liberation from the oppression of the whole society, in general, and of women, in particular, but which role have women in Kurdish society that the YPJ wants to release?

Kurdish women face various forms of discrimination and oppression: as part of a nation without a state, as part of a society strongly patriarchal an influenced by Islamic fundamentalist. In the four political-administrative areas in which Kurdistan is divided, have very similar patriarchal characteristics that discriminate women as women and have repressive policies against Kurds as Kurds, which is in addition to the peculiarities of Kurdish feudal society. The result is the exclusion of women from political life, the spread of forced marriages, of female genital mutilation and honour killings: in 2014, 6,082 women were killed in Iraqi Kurdistan.

The first sign of women’s participation in political life was the manifestation of 1 January 2006 to support Sevda Aydin, deported and raped by policemen ununiformed, followed by a public statement of support by 36 intellectuals women in favour of Pinar Selek, a sociologist accused of one explosion in one bazaar in Istanbul.

In fact, despite Kurdish women have a long history of struggle for national liberation alongside men, they have been marginalized even within the liberation movements, where often the structure is strong patriarchal too. The Kurdish context is only one of the examples where women are able to express their positions and claim for their rights only during social disorder phases that often represent an opportunity to establish their own movement, which would not have been possible under normal conditions. Activism or militancy legitimate indeed their claims that, once the crisis is over, are likely to be swept from the new political system established that draws easily to conservatism, in order to restore social and civil stability. The importance of the existence of women’s associations is crucial especially to continue the battle for recognition of women’s rights before, during and after the stages that mark the transition between the different government systems.

Currently South Kurdistan is the area that enjoys greater autonomy, in which there are relatively democratic institutions capable of promoting a fair economic development of the area, but many problems have not been addressed or not been identified yet. For instance, women are struggling to make the society recognize the problem of violence against women and to formalize the laws against violence against women. In fact, taking into account the number of reported cases, not considering that the majority of women fear to report case of violence, only 0.7% of responsible person was identified and arrested but often released after a short period.

For these reasons, the presence of female organizations are essential to achieve the effective recognition of women’s rights, as a top-down approach is often inadequate and reinforces the gender gap in an indirect manner. The mobilization of women, together with the presence of some Kurdish parties explicitly feminist oriented, led to the creation in 2006 of the co-presidency system: 1 man and 1 woman share municipalities’ leadership, management and responsibilities. In addition, equal numbers of women and men have to be guaranteed in the 5050 commissions at different administrative levels. 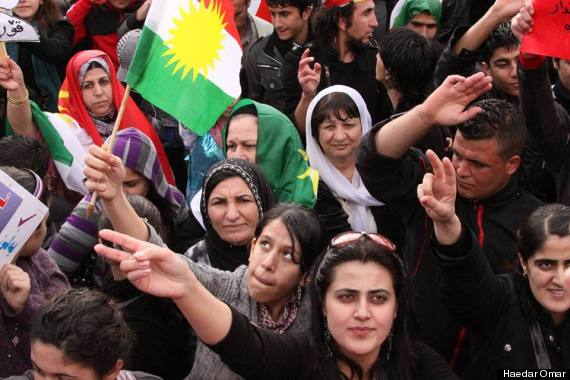 The idea of gender equality as a fundamental prerequisite for the Kurdish national freedom cause, spread also in the other area of Kurdistan. For instance, a Rojava, in the West, the government adopted the co-presidency system and the equal number of women and men in the boards at various administrative levels, to ratify the free participation and full involvement of all women in the legal, political and civil system, including the army defence forces.

The government in Rojava do not allow men, who are responsible of domestic violence and/or are polygamist, to take part in politics or civil society organizations. Moreover, violence against women and early and forced marriages are outlawed and criminalized. Therefore, western Kurdistan political system puts the rights of women as one of the main pillars of its agenda, together the respect for the ethnic and religious diversity, democratic participation and environmental protection. It stands as a different system, synthesized in the word democratignation that is a modern democracy based on the dignity of persons, in which the rights of all are recognized and respected by everybody. Model who wants to be in contradiction with the current capitalist, nationalist and patriarchal global dominant system, transforming differences in diversity, using them to divide people based on gender, ethnicity and religion, rather than present the differences a chance to enrich and create new opportunities. The capitalist economy excludes women from the system and they have no representatives in many sectors of the society: this does not allow the establishment of a real and complete democracy.