Ecuador on the march 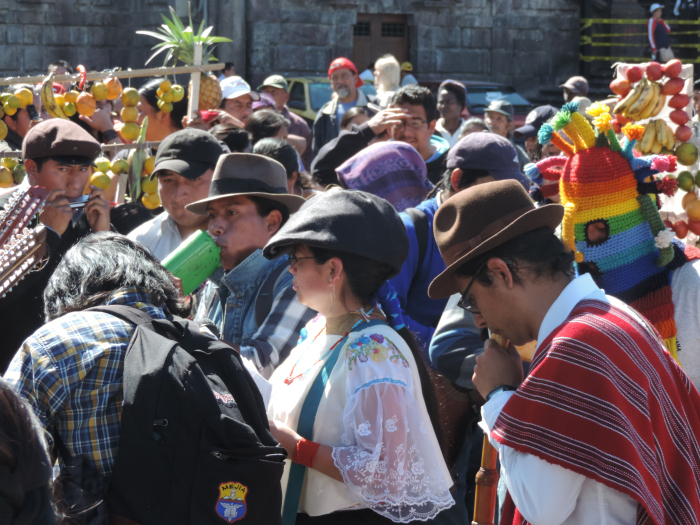 Ecuador on the march

The night we arrived in Quito on our taxi driver tells us that he has to drop us 200 meters from our hostel because the road is blocked by a demonstration against the latest laws proposed by the government taking inheritance and speculative gains. Driving through the city we notice that roads are covered with images of Pope Francis, yellow and white ribbons, welcome banners for the visit of the Holy Farther. The city is in turmoil because of a tense political situation due to recent decisions taken by Correa’s government that meanwhile is preparing to meet the Pope, whose visit is a chance for many to denounce the situation faced by the marginalized people living in the suburbs and campaigns, mostly belonging to one of the many Ecuadorian indigenous communities. The idea of the country that we developed through readings and information gathered from the press as well as by attending the World Social Forum, does not seem to correspond with what we see and with what we hear by listening to different social realities we come across from Quito to Cuenca.

From the beginning it appears very clear, however, the strong environmental awareness and the strong link between social mobilization and defence of the territory. “Ecuador has a different history compared to the neighbouring countries,” said Yvonne Yanez from Acción Ecológica (Ecological Action) “it is a geographically small country that has a great biodiversity and where there was no rivalry between the various colonial lordships thanks to the availability of arable land. The relationship with nature was always important for all Ecuadorians and, in the last 30 years, the indigenous movement has given a great impetus to this trend, confirming and reinforcing the concept that there is no separation between nature and human being, between the environment and indigenous communities.”

The government political work that led to the signing of the Free Trade Agreement with the European Union in December 2014 (which will come into force in 2016) and the new laws regulating land rights and mineral resources have certainly marked important occasions for mobilization and convergence of different social actors. In 1973, with the approval of the previous land law, the indigenous community organized for the first time to obtain ownership over the land and to see recognized their agricultural work. From the ‘70s onwards, the indigenous communities started to develop a more structured organization leading to an indigenous uprising in early ‘90s. During these years the indigenous community established itself as new political and social actor of civil struggle that wants to play a fundamental role in the society and acts as the fundamental component of the new multinational state. The new Ecuadorian constitution officially recognizes 14 indigenous nationalities, 18 pueblos (peoples) and 12 indigenous languages. In the 1996 elections, the indigenous movement was represented politically by the Pachakutik Movement of Plurinational Unity – Nuevo País, with the main aim to encourage the political participation of the indigenous communities. This new political mobilization process, led, in 1998, to the election of eight members to the National Congress. Over the years, however, Pachakutik, seems to have lost the support of its social base and, consequently, its political weight in the Ecuadorian scenario. 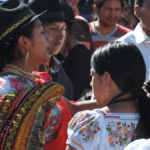 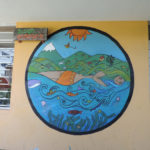 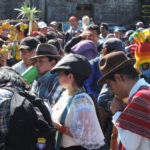 Founded in 1972 in the town of Urubamba, ECUARUNARI, the movement of the Quechua community living in the sierra (highlands), with the aim of defending land rights and its management on a regional basis rather than in a centralized way. Carmen Losano, ECUARUNARI council member from 2013, tells us about the long resistance of the Quechua community against the government’s policies aimed at introducing into the country the rules dictated by the “green revolution” and strongly market oriented production systems imposing intensive monocultures. Carmen says: “The government, through the green revolution, introduced genetically modified seeds, pesticides and chemical fertilizers, imposed intensive monoculture cultivation that goes against the traditional system of agricultural production and threatens the preservation of the indigenous cosmovision. This kind of agriculture is threatening the health of our communities, it produces unhealthy food, and the industrial agriculture production system does not follow the rhythm of the earth and of the soil and does not allow the collective work and management typical of the indigenous communities. From our relationship with the soil, the knowledge of medicinal herbs, the defense of the traditions, we can guarantee food sovereignty, people’s wellbeing and a relevant education for our children. Development brings roads and infrastructures but is also plundering our territory with mining projects that endanger the ecosystem balance… can we say that we are living well then? “

One of the mining projects that Carmen is referring to is the Quimsacocha gold mining project where ECUARUNARI is active defending the water in the area together with other organizations including the FOA – Federation of Organizations of Azulay, a federation of indigenous people the has been working for 22 years in the Azuay region, southern Ecuador. “FOA” says its president Lauro Sigcha “was created to defend the rights of indigenous communities and rural communities and to address the welfare policies of the government that does not allow the improvement of the living conditions of the communities themselves.”

Quimsacocha (which literally means three lagoons) is an area where 2 large hydrographic basins meet: the Jubones basin, which flows into the Pacific Ocean and the Santiago basin, a tributary of the Amazon river. In 2004, the Canadian mining company Iamgold inaugurated the mining prospecting discovering large deposits of gold, which extraction would jeopardize the groundwater sources in the area. Quimsacocha, in fact, has a glacial lake system including over 30 lagoons from which three rivers originates: the Tarqui and Yanuncay rivers, supplying water to the Cuenca Guapondélig zone and the Rircay river, providing water to the Giron, San Fernando and Santa Isabel areas. FOA immediately took the leadership of the community resistance against the project, organizing acts of resistance, marches, demonstrations, meetings, street blocks and gathering support to prepare the first community consultation in 2011, a process in which the people questions the work of the local authorities. Lauro says: “Communities mobilize quickly and tenaciously when it comes to water”.

Initially, also the Correa government, elected in 2007, declared itself against the proposed gold mine and promised that he would do everything possible to block it, but over time the government changed its position. In the strategic plan of the government, the area of ​​Quimsacocha is indicated by the name of Loma Larga (Long Hill) in an attempt to create confusion. The government is now trying to gain the support of the population in favour of the mining project creating consensus around the mining policy by presenting it as an instrument through which campesinos (peasants) could really improve their living conditions, dice Correa: “Currently the peasants are sitting on a lot of gold, but they live like beggars when through the social responsibility of mining projects we could build hospitals, schools and infrastructure.”

The communities have been thinking about the benefits of the mining project of Quimsacocha and the impact of this intervention on the communities and on the delicate ecological balance of the valley and they have chosen to fight to defend water, which is essential to ensure people’s health, cultivate , maintain green fields and quench the animals. Without the presence of FOA and the commitment of the community of San Fernando, Giron, Santa Isabel, Sigsig, Chordeleg, Gualaceo, and Quingeo, the project would have started already. “In the community of Condor Mirador (another gold deposit in a nearby area) community resistance was not strong enough so the mining project started and now people living there are suffering sevre consequences that they had previously underestimated” says Lauro.

At the moment, the company is conducting an environmental impact assessment of the project but the study does not include a specific hydrological section and has not been demonstrated how the project will ensure that there will be no groundwater pollution around Quimsacocha. In this phase, the FOA has filed a petition to call for second popular referendum in the Giron area for which is required the collection of 10,000 signatures. The government bureaucracy has seriously slowed down the process, it took 2 ½ years to grant the permission to proceed with the popular referendum. At the same time, the government called another referendum on a counter-proposal asking the question about the mining project from another point of view. In the former, the referendum question read: “Do you agree with the mining project in the periglacial and water springs of the Kimsakocha hydrogeological system ?” While the counter-proposal referendum was formulated: “Do you agree that 60% of the mineral wealth is the exclusive property of only certain geographical areas?”

The confrontation with the institutions is often harsh, with clashes and arrests, 3 members of the movement were arrested and convicted on charges of terrorism. The community mobilization to request the release of the three was so impressive that the authorities decided to release the accused after eight days of detention. FOA commitment is not just to defend water, but also to defend their land and the fundamental rights of the indigenous communities. Lauro told us about the situation land distribution: “Land is not equally distributed: 12% of landowners own 80% of the arable land, while 78% of peasants only own 15%. Because of the lack of arable land, many farmers leave the countryside and move to the city where they start small informal economic activities, selling cigarettes and candies on the street. It is clear that the land problem is still present and has to be solved. “

The question of education is another key action point for FOA. In 2012, the country had 22,000 schools, in 2015 the number was reduced to 16,000, with the aim of bringing the number to 5700. The government is closing down most of community schools. After 1990 the indigenous communities decided to promote intercultural and bilingual education in order to redeem and preserve the Quechua culture and language, perpetuating community values ​​of the Andean zone. Through the setting up of community schools with the approval of the State. The government has now decided to unify the educational system to create the so-called “millennium schools”, large modern buildings, centralized, equipped with the latest technology, in which teachers follow Western teaching curricula. Children are thus forced to leave their villages and move to the cities to study and soon lose contact with their original community.

The general situation of the country sees a government that is gradually losing popular support, not only among the indigenous communities, but also among many workers and teachers seeing their social security endangered, following the presentation of the Inheritance and speculative gains Acts by the government.

We meet Lauro in the days when the FOA and other local organizations are planning a large event and a long march through the country to Quito. We participate at the road block in Cumbe where by show of hands it is decided the starting date of the march: the first week of August.

As agreed, from 2nd August, indigenous organizations, trade unions, student associations and ecologists are participating in the march “for life, dignity and freedom” decided by CONAIE (Confederation of Indigenous National Ecuador, gathering all the indigenous organization of Ecuador) but originally proposed ECUARUNARI (the Quechua speaking indigenous organization). The march is organized in three columns that will travel across 7 provinces of the country from the north, from the south and from the Amazon rainforest, and will meet in Quito on 13th August, that day the organizations will also call a general country-wide strike and peacefully occupy the main streets of the capital city centre. A very different country from what we were expecting, a country that once again is looking for a balance and it is doing it as usual:  struggling and marching.