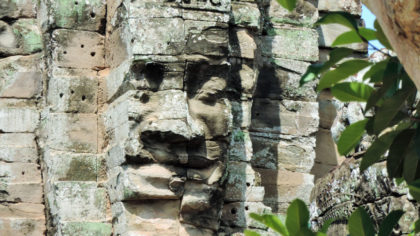 (Thanks to Raffaella Rossi for the translation)

Silence. A golden Buddha is shining right in front of me, almost lost in the darkness of the temple. I sit comfortable to better admire it, completely covered in darkness. The air is stale and filled with incense perfume. Compared to all the Buddha statues I have seen for far, that were even 10 metres tall, this one is tiny. Not far above my head, the light is peeping through the spire as I sit here, on the cold and dusty stones, in complete silence for a moment contemplating and admiring this placid Buddha.

I slowly climb the last steps that take me at the top of Bayon temple, part of Angkor Thom complex, to finally get close to the Buddha and spend a moment alone. Almost a miracle considering the amount of tourists around. We currently are in Angkor Wat, at the border of the city of Siem Reap, the most important and visited archaeological site of all South East Asia. Tiziano Terzani, Italian journalist and writer, who loved this country and its temples writes “…this is one of the few places in the world that makes you feel proud of being a human being; a place where greatness can be experienced in each single stone, tree and breath you take.

In despite of the intolerable amount of tourists visiting the site, it is impossible not to agree with Terzani. Cambodia is a land of architectural and engineering marvels but, in its past, it has also shown to the world how deep down the humankind can reach. Silently, all the times. Silence has hidden the American bombs dropped on forests and rice fields of the Vietnamese borders. The silence of people who knew that speaking up during Pol Pot regime would only mean dying. Years later, silence again is covering the sell-off of the land by its own political class.

Land and water have always been at the centre of the history of a country which, in despite of being relatively small, is full of precious natural resources and a perfect place for cultivating rice, so important for the whole South East Asia. At the peak of the Khmer empire (between XI and XII century) thousands of people, subjects to the King-Gods, Hindu and Buddhist, moved tons of land to build ditches of over 190 metres in width and 1 Km in length, and canals to drain the water, giving at the same time protection and a magical appearance to the temples.

A land that is always been contested, sitting between the powerful Siam Empire, nowadays Thailand, on the west side and Vietnam at the west side, until it became Frenchprotectorate until the 1953, year of the Cambodian independence.

A fertile land, as we notice admiring the landscape from the top of a Buddhist temple near Battambang. A lush green flatland, crossed by roads, full of noisy bikes, rickety auto rickshaws, wobbly buses and smelly trucks heading to Phnom Pehn. A boundless farmland where the best rice of the country is grown, where the horrible memories of the Khmer rouge are still kept and where a single cave turns out to be the grave for thousands of Cambodians killed by the regime. 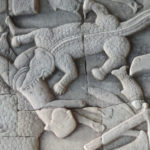 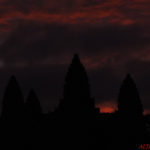 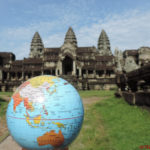 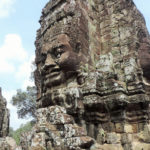 A land that is still soaked in blood, in places like Choeungk Ek, one of the several extermination camps where between the 17th of April 1975 and 9th of January 1979 2 million Cambodians out of a population of 7 million died. One Cambodian out of 3 did not live to see the end of the regime and the rest was left to deal with one of the most horrible tragedies of the XX century. A land that still returns bones and clothes from what is left of over 300 extermination camps that had one single goal: to destroy the history, culture, identity and religion of a whole country by physically eliminating the intellectuals, clergy and anybody who could write and read as they represented the corruption of the Cambodian society. The only ones meant to survive were the farmers, the only ones to represent the ancient and true values of the Khmer. The motto was “In order to eradicate the weed you need to eliminate the roots”. That is how whole families, millions of innocents were slaughtered as they could not match the ideal Cambodian society the regime had in mind. Not only the Khmer rouge killed a third of the population but also aimed at destroying the different social classes levelling it all into one, eliminate the currency, the private property and even family as an institution. Nobody was even allowed to cook at home and share a meal with their family but rather eat all together at the soup kitchen.

Furthermore, the Khmer leaders, considering urban centres a dangerous place for aggregation and soul corruption, decided to evacuate thousands of people from first from Phnom Penh as soon as the city was freed and then from the main cities. Most cities were emptied from one day to another, everybody forced to leave everything behind a move to the countryside where they would collectively working in rice fields and contributing to the build new irrigation ditches.

One of the key places that helps understanding how far the delusional Khmer ideology reached is the Tuol Sleng prison, former school transformed into a detention and torture centre by the regime. Nowadays a fundamental remembrance site. Walking the empty rooms, reading the stories of the ones who died and the few who survived is touchy and overwhelming at the same time. The few who managed to come out alive carry on their life with a sense of guilt and shock for what they have seen. Arbitrary detention based on fake confessions obtain with torture, food, sleep and water deprivation, physical and mental violence, humiliation. Prisoners were forced to release false confessions that would justify their own death and prove that the decisions made by the Ang Kar party (literally translated as The Great organization) were right and fair. Desperation was as such that prisoners would attempt suicide by setting themselves on fire or cutting their veins with a pen or a broken spoons. Prisoners were used as blood donators, their blood drained out until death would take them. An even worse fate was reserved for women who were raped by groups of 10 people and tortured by teenagers not older than 14 years old, indoctrinated and made part of this murdering machine. The regime was so highly structured and duties so maniacally divided between each single person that nobody would necessarily see the responsibility of their actions and recognize the madness of the dictatorship. 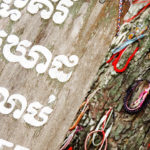 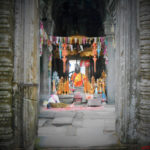 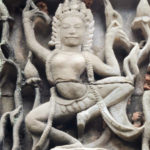 Every single person that was arrested and killed was photographed and their data obsessively registered. All their photographs, faces, now hanging on the museum wall, are disturbing. All you can read from these eyes is the lack of hope, desperation and the resignation. Some young women are potraited holding their babies, who would be later taken to Coeung Ek, beaten to death against trees and buried in a common pits.

The land is screaming for justice and revenge. 36 years have gone past after the end of Pol Pot regime. The country has been invaded by Vietnam first and temporary controlled by the United Nations which were supposed in two years to put back together a country that was coming out of 20 years of war. The United Nations experiment, the intervention of hundreds of NGO’s and the millions of dollars of donations still haven’t been able to win the fight against poverty. Why is this, we ask ourselves? We are not expecting to be the ones who find answers and solutions but we do feel that, so many years after this tragedy, the healing process of a country that has suffered so much, hasn’t even started and nobody has taken real responsibility or apologised for the millions of deaths. The trial for the main five Khmer rouge leaders still alive has only started in 2007, but Ieng Sary died during the trial itself, three others have been received life sentence and Ieng Thirith, Ieng Sari’s wife, has been released in 2012. Pol Pot, the main leader of the communist party Kampuchea, died in his own bed in 1998 without spending a single day of his life in prison.

The lack of justice for what has happened in the past is not the only problems Cambodia is facing but also a high level of corruption (according to Transparency International Cambodia has been listed 156th over 175 countries). The current political class that established itself in the 80s treats the country like their own family property, exploiting the natural resources of gas, oil, mines and selling off the land to big transnational companies. The redistribution of the land process has been named “Economic land concession”, which simply means selling off the richness of the country without taking in consideration the needs of the Cambodian farmers who are the true spine of the country.  Land concession for farming aims mainly at the production of rubber, sugar, paper and palm oil: products that do not contribute to the food sovereignty of the country and steal land to the small farmers. The government, not capable of supporting smaller and family run farms that would also be socially and ecologically more reasonable, ends up dividing the land in small territories and selling it off for the best offer. A secondary effect of this process is the eradication of thousands of people from their home land: between 2000 and 2014 over 500.000 people have been pushed away from their own land, often without even being reimbursed for the loss.

Cambodia, its people and land, will always stay in our memory for its friendly and smiley people, the ancient temples, majestic and verdant nature. At the same time we will carry with us the horror of the Khmer rouge regime, the American bombs e the thousands of lives lost in the name of a delirious and ruthless vision. We leave the country worrying about its future, the lack of justice for the victims of the past and the corruption of the current political class. We leave hoping time will teach respect for the land and people living here and that silence will not win the country over again. 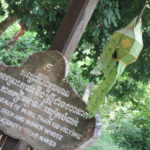 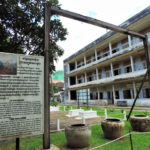 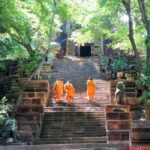 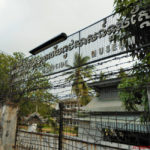